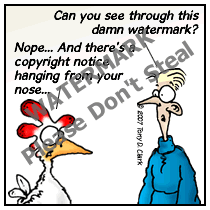 Update: Michel the owner of the site in question has posted a response in the comments below, and sent both Mike and me a private response. I have to say it takes a lot to own up to something, especially in a public forum, and I really respect that. I’ll be contacting Michel directly to work out the details, but I’m glad this all worked out amicably.

I actually had another post all ready to go for today, when I saw this.

Seems that some enterprising individual decided to take a bunch of strips that Mike Vizdos and I do for Implementing Scrum, and some of my work from here, and make it their own. With ads. No attribution, so linkbacks.

Of course the first reaction is…

But you know what?

There’s something I tell my creative clients, colleagues, and friends about life on the interwebs — something I knew from the beginning — if you put your work online, be prepared to have it stolen. Watermarks and other garbage won’t stop it.

That’s just the nature of the beast, and it’s just too damn easy to do.

Does that make it right? No.

I just realized a long time ago that I’m better off making money from various entrepreneurial ventures and projects, and make the art thing be for fun.

The interwebs are filled with this kind of thing, but it could be much, much worse.

It’s flattering in a way, since no one copies crappy work.

Hugh MacLeod had a similar perspective when Michael O’Connor Clarke pointed out that his work was being copied (allegedly):

I’m just guessing some kid came across my work randomly one day, thought it looked like fun, and decided to have a go himself. I did the same with my favorite cartoonists, when I was young. Whatever.

At least the guy taking our stuff is doing a pretty decent job of it. If you’re going to have your girlfriend stolen, at least you hope the guy’s good-looking, right? I am interested in hearing his (or her) side of the story. I’m also asking kindly via this post for credit and a linkback.

The first thing I’m going to do is something I’d been planning to do for a long time and just never got around to it. It’s to explicitly state that the work here is under a Creative Commons License. I get asked all the time to use stuff, and some just do it (with credit and linkback, of course). So now it’s clear.

Now, when it comes to readers I am lucky enough to have a group of creative, sharp-minded business folks, with a sprinkling of lawyers (based on email and feedback). So to you I pose the question:

What do you think and what would you do?